As the versatile plant it most definetely is, it comes as no surprise that hemp may be applied also to the field of construction, acting as a construction and as an isolation material.

Using hemp hurds, we are able to make fiberboards and plywood. Cellulose from the same basic material may be used as an adhesive making the finished product 100% organic, biodegradable, insect resistant and waterproof. Unlike regular wood in the case of a fire hemp does not burn in flames but merely kindles, so in a fact it prevents the fire from spreading.

Fiberboards
These boards are noted to have a finer and more compact outer layer as well as a more homogenous surface making it especially suitable for use in the furniture industry since they are easily coloured, varnished and veneered with noble veneers as well as being able to be glued together along with laminate-ultrapas boards and tepistried. In construction they are mostly used as barriers, protective agents, suspension systems, floor and wall padding,...

...is made from hemp fiber and is thought to be an ecological equivalent of stone and glass wool which are usually used as insulation for roofs and fasades. Heat insulation of the material is achieved by small air pockets that are naturally formed between particular fibers. Considering heat and sound insulation hemp's features are comparable to stone wool (heat conductivity 0,040 W/mK) but is significantly lighter (lesser density) in considerably more moist resistant which even increases the material's heat conductivity. Its primary advantage being of an ecological standpoint – the entire process of hemp insulation production has a negative carbon footprint, including the energy needed to grow and process the plant itself (unlike stone wool which is made from melting basalt and diabse at 1600°C(!). It is also considered to be more human friendly since it does not contain any artificial substances of additives that would be harmful (i.e. skin and respiratory irritation). By using hemp insulation we also avoid the undesired effect of subsidence and structure deformation due to weight. 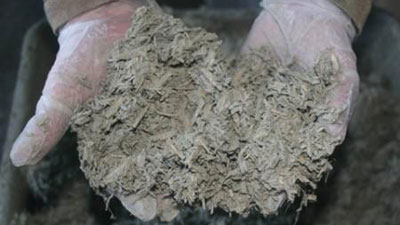 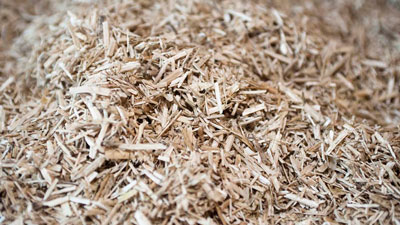 Hempcrete is an eco-material composed of:
1. Hemp hurds ,made mostly from cellulose, which is then dried and chopped into smaller parts about 5 cm in size (for plaster and machine spraying a finer fiber mix is used). It's made from 37 % cellulose, 16.5 % hemicellulose, 21.8 % lignine, 5 % pectine, 8.9 % extract and 10.8 % ash, flint and tanine.
2. Lime mixture (made from slaked lime, natural hydraulic lime NHL5 and cement, sometimes some sand for indoor plastering). Slaked lime [Ca(OH)2] is made by adding water to burnt lime [CaO]. After being built in the lime becomes again carbonized (it binds with the CO2 from the atmosphere) and turns back to limestone [CaCO3], by doing so it becomes fortified.
3. Water

By adding a higher percent of concrete or clay to hempcrete we are able to achive tensile strength of such value that the material is able to act as a load-barrer of the object itself. In that case bricks and prefabricated panels are made. Due to a lower hemp content the construction itself is less insulative and is thus more appropriate for warmer climate. 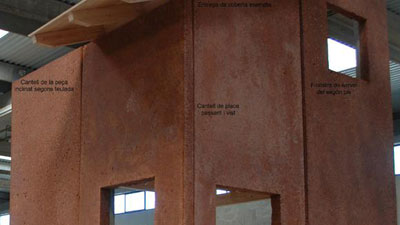 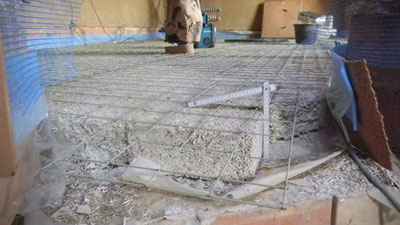 Hempcrete is mostly used as a filler for wooden sceletal constructions which are the same as when building a prefab. In this case hempcrete acts as a filler for walls, roofs and floor that do not bare the pressure of vertical loads due to insufficient tensile strength. On the other hand it is strong enough to take the pressure of horizontal forces (i.e. in case of an earthquake). Further wind protection is therefore not recquired (i.e. with diagonales). 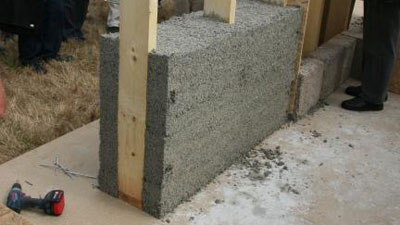 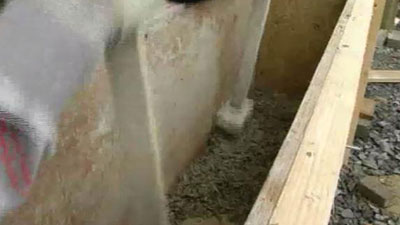 Cross-section of a wall made from hempcrete – wooden pillars are protected from insects and moisture (left), Pounding the material intothe panelling with hammers (right) (Picture 7,8)

Hempcrete may be built in by hand – panelling is set around small pillars and into it a still moist material is applied layer by layer. Using this approach no special tools are needed, nor a substantial ammount of prior knowlede is required the only set back being that this method is somewhat time-consuming.

Recently a more wide-spread method has been in use. With it hempcrete is built in by mechanical injection where a smaller ammount of adhesive is needed, consequentially the wall is more insulated. By injecting hemprete the ingreditents are mixed together during the process itself (although many variations to the theme exist) where adhesive usually exits through one nozzle (lime mixture + water) while small pieces of hemp stem center come from another nozzle. Panelling is set all throughout the wall height behind the pillars and is then onesidedly injected on. After the panelling had been removed the procedure is then repeated from the other side so that the pillars remain firmly set within the construction.

Depending on where hempcrete is being used or the function it is to have, different mixtures of hempcrete may be prepared:

Impact of building with hemp on local economy and environment:
Written by: Sani Okretič Resulbegović, B.Sc. in arhitecture 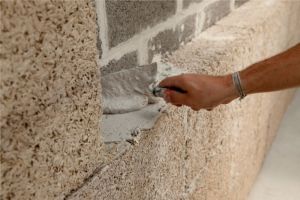