In June 2015 we have reported on the wonderful achievement of Konopko at the ClimateLauncPad nationals where the idea of »Hemp plastic biogranulate« stole the 1st prize. Winning in the preliminaries enabled us to move ahead in the competiton to the international podium.

Placing to the international part of the competition in Amsterdam gave Konopko and the team (Plastika Skaza d.o.o., Polymer Technology College Slovenj Gradec) even more motivation to further engage in research activities in the field of hemp innovation. Although the competition itself offers the final challenge winners some financial support, we in Konopko Coop realise that by participating in such events we increase our chances of realizing certain business ideas and by competing we open ourselves to potential business partners and investors.

And so came September 4th 2015 when representatives of Konopko, along with 82 other teams, were given the unique chance of presenting the project we so believe in to a panel of judges. The judging took place in larger clusters of teams and had many steps – short presentations of the projects. The Konopko team, who had the misfortune of being in one of the strongest groups of the competition (the main judge's words, not ours :) ) were represented by: David Geršak (president of Konopko & engineer), Alenka Zapušek, M.Sc. and Tadej Smrdel (engineer).

Although the project »Hemp plastic biogranulate« did not make it to the Grand Finale (consisting of 15 top ideas) we are more than proud of our accomplishments thus far. The winning idea »Desert Control« is a product of eight years of development which is more than 16 times of how long our idea has been in the making. So we take a good load of courage along with us from this experience and we will continue to develop the idea further.

By participating in the European finals we believe we have exposed Konopko Coop as a business with potential in scientific research. More info on the hemp biogranulate product available here. 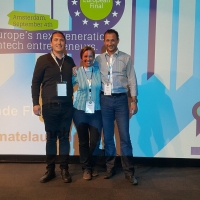 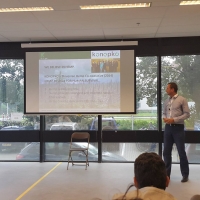 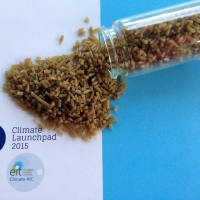